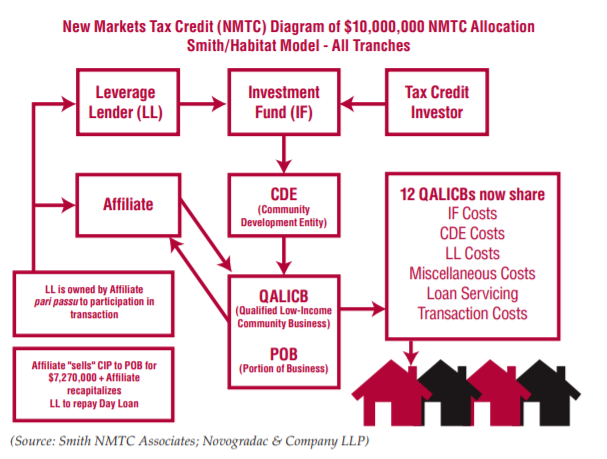 This article was originally published in the New Market Tax Credits Report, March 2012.

Because new markets tax credit (NMTC) projects of varying size have similar transaction costs, financing qualified low-income community investments (QLICIs) smaller than $5 million can often be inefficient. By the time the transaction has closed and the fees have been paid, very little benefit remains for the qualified active low-income community business (QALICB). For that reason, many CDEs require a minimum of $5 million or more when choosing a potential QALICB.

To address small business financing needs, Smith NMTC Associates, in partnership with U.S. Bancorp Community Development Corporation (USBCDC), Novogradac & Company LLP, Polsinelli Shughart, Husch Blackwell and Elkins PC, and Kutak Rock LLP developed an “open capitalization” structure to deliver smaller sized QLICIs more quickly and efficiently. As part owner and manager of a community development entity (CDE) with and for Habitat for Humanity International, Smith NMTC recently used this structure to deploy $28 million of NMTC allocation in three transactions, which funded 12 QALICBs through 12 separate QLICIs. The QLICIs ranged in size from $1 million to $4.8 million and the QALICBs that benefited were Habitat for Humanity affiliates across the country.

The open capitalization model combines multiple, smaller QALICBs in one transaction. Cost savings result through several mechanisms. First, by allowing multiple QALICBs to join in one transaction, closing costs and other fees can be spread across multiple project loans and shared by multiple QALICBs. Because the QALICBs are bundled in one transaction, only one investment fund is required, resulting in further cost savings. Second, the QALICBs share the same attorneys. Those attorneys use documentation that has been refined and streamlined over the course of funding more than $200 million in transactions. Additionally under the open capitalization model, all due diligence is collected at the front end and the forecast is generated before the calls with attorneys even begin. CDEs and investors often are reluctant to fund smaller QLICIs because smaller QALICBs are perceived to have a lower level of sophistication, and this can raise compliance concerns. The open capitalization model also addresses that concern by moving the heaviest burden from the QALICB to the guarantor. The guarantor along with a skilled staff of attorneys and a certified public accountant manages the QALICB recapture risk, leaving the borrower to do what it does best: pursue its not-for-profit mission. As the borrower’s “back office” and compliance agent, the guarantor manages the complexity of programmatic compliance and makes sure that the program does not outweigh its benefits. The model also requires that ongoing compliance fees be reserved up front, thus eliminating any risk that the smaller QALICB would be unable to cover its ongoing compliance expenses. For example, in the transaction mentioned earlier, Smith guaranteed the recapture risk for the Habitat affiliates (the QALICBs) and Habitat for Humanity International; by doing so, it became invested in the reporting,
compliance and performance obligations of the Habitat affiliate. As a result, Smith becomes the Habitat NMTC back-office pay agent.

Because Smith provides the guaranty and financial counseling and other services (FCOS) to the QALICB, the tax credit investor – in this case USBCDC – is provided continuing comfort throughout the life of the transaction and the other CDEs involved in the transaction receive reporting assistance. The FCOS are critical for success because the QALICBs under this model use the portion of the business rule (POB) to participate in the NMTC transactions. To make the structure work, QALICBs’ finance personnel are counseled and each POB ledger entry reviewed to maintain consistent financial reporting that comports with NMTC regulations. Smith also works with the QALICBs before each transaction to explain the model and compliance requirements to their boards, staff and finance committees.

Using this model, the team considered  aggregating 12 Habitat QALICBs and their QLICIs into a single transaction to save costs. However, combining 12 QALICBs in a single transaction was untenable. So, ultimately, the team decided to use one leverage lender, one investment fund and one sub-CDE, while closing the QLICIs in three separate tranches of Habitat affiliates on a successive basis over a six-month period. In each tranche the leverage lender operating agreement was amended and restated to admit new Habitat affiliates whose resulting diluted interests were pari passu to the aggregated QLICIs. Counsel for the leverage lender is the manager and has the authority to accept the “put” or exercise the “call” from or to the investment fund at the end of the compliance period. The investment fund operating agreement and sub-CDE operating agreement were drafted to anticipate and accept additional capitalization through amendment and restatement. Novogradac & Company aggregated the schedules so that the successive tranches reflected the aggregate funding of fees, reserves and benefits.

This structure results in substantial ongoing cost savings. With one leverage lender, one investment fund and one sub-CDE, the number of tax returns filed annually is reduced. There is one investment fund asset management fee and one sub-CDE asset management fee. Transaction costs were cut by a third over what they would have been had three separate transactions occurred, rather than three tranches of one transaction.

By transacting 12 QLICIs through the same leverage lender, investment fund and sub-CDE, transaction costs were also spread over more QALICBs, resulting in a total compliance period cost per QALICB of $34,592. In this particular example, if the same transaction (with the same exact costs) were to occur with one QALICB, the total compliance costs would be $285,823. The difference is attributable to additional auditing costs for more QALICBs. This represents a savings of $250,000. The transaction costs for the open capitalization structure averaged $50,698 per QALICB. The same fees for a similar transaction with a single QALICB can easily exceed $350,000 (or more) – a savings of $300,000. This suggests that total savings per QLICI can exceed $500,000 per transaction through this structure. And, not only did the structure save costs, but it allowed for smaller QLICIs to be made: the average QLICI size in this open capitalization structure was $2,279,456. Removing the outlying high and low QLICIs, the average QLICI size was $1,841,394 (averaging 10 QLICIs)!

Aggregating smaller QLICIs in a single transaction ultimately provides impact where it is needed most – to smaller QALICBs that individually may not be able to benefit from an NMTC transaction. Using this model, Smith, in conjunction with USBCDC and seven other CDEs, has provided more than $200 million of financing in support of the construction, financing and sale of Habitat homes across the nation. This translates into 2,227 homes being built for needy families while revitalizing low-income communities in more than 25 states and creating more than 3,000 construction and nearly 1,000 permanent jobs.