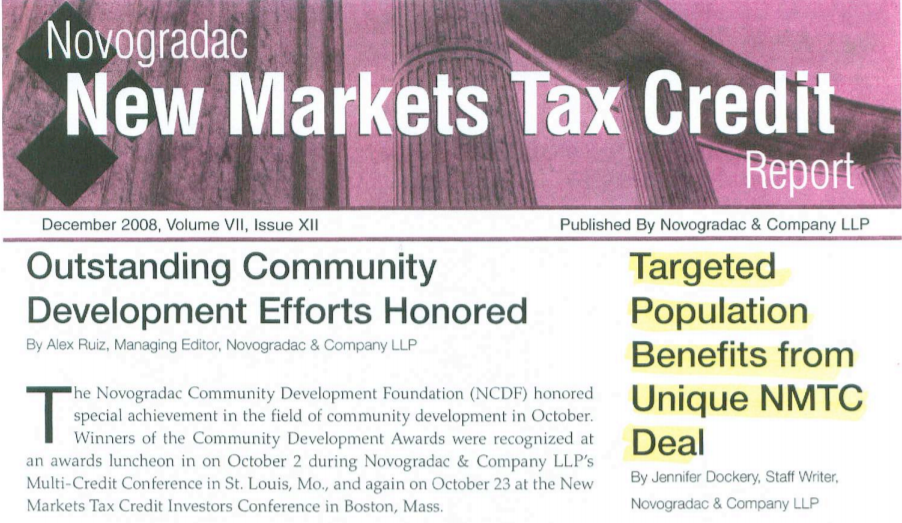 In mid-July, U.S. Bancorp Com­munity Development Corpora­tion (USBCDC) and Habitat for Humanity International’s (HFHI) Community Development Entity (CDE), with the help of Smith NMTC Associates LLC (SNMTCA), closed a new markets tax credit (NMTC) transaction that the three entities hope will serve as a model for other organizations. The participants used the Internal Revenue Service’s (I RS) “targeted populations” criteria to bring together a single transaction that benefited five independent bor­rowers, eliminated the lender and involved more than 300 mortgages.

“This deal was very com­plicated with five different QLICis. Using targeted populations and try­ing to make a portion of the busi­ness work with for-sale housing add­ed complexity. We were able to get something that I hope can be easily replicated in the future,” said Tracey Gunn, project manager at USBCDC. PolsinelIi Shalton Flanigan Suclthaus PC represented USBCDC during the transaction.

In 2007, HFHI’s CDE, HFHI-SA NMTC l LLC (HFHI-SA), received a $25 million NMTC allocation. HFHI, with the legal assistance of Kutak Rock LLP, secured for its affiliates a $7.8 million equity investment from USBCDC. The affiliates will use the funds to build 305 houses in the Gulf Opportunity (GO) Zone, which will then be sold to low-income families.

“The CDFI’s allocation was limited to the GO Zone, which allowed us to assist in Katrina and Rita disaster recovery,” said Drew Marlar, HFHl’s associate general counsel.

Attorneys Howard and Donna Smith, founders of SNMTCA and long time volunteers with HFHI’s St. Louis, Mo. affiliate, approached the organization about the possibility of obtaining NMTC funding. HFHI liked the idea, and the Smiths and HFHI formed HFHl-SA.

“Howard and Donna Smith came up with the concept and brought it to Habitat International,” Marlar said. “Nobody had really done anything like this before … It ended up being a wonderful arrangement for everybody.” SNMTCA, with legal assistance from Husch Blackwell Sanders LLP, structured HFHI’s first NMTC deal.

” … we had five borrowers closing together in one five-part transaction .. .without U.S. Bank, that wouldn’t have happened as smoothly,” Donna Smith said.

For USBCDC, the residential component con­tributed to a unique financing structure. Tradition­ally, almost all NMTCs have been used for commercial ventures, not for for-sale housing. In this transaction, USBCDC and the Smiths had to incorporate 305 mort­gage loans into the deal.

“This is something the industry is trying to fig­ure out. [It is] one of the first deals where this has at least been a component,” Gunn said.

According to Marlar, the individuals and fami­lies who will live in the Habitat homes work with the local affiliate on the construction of those houses. In exchange for 200 to 300 hours of “sweat equity,” partner families can purchase homes at cost, through a zero percent, fully amortizing mortgage. At the time the transaction was initiated, the HFHI affiliates had many houses that were in construction or had recently been completed.

” … we were able to leverage construction that was already in progress … it allowed us to close the entire allocation in one transaction,” Marlar said.

According to Howard Smith, this arrangement eliminated the need for a separate lender. HFHI made the loan directly to the affiliates, repaying themselves as the mortgages were paid off. “That allowed for issues of security and redemp­tion to really be secondary to targeted populations,” Howard Smith said.

“It allowed more people to benefit,” Gunn said. If USBCDC could not use the targeted populations cri­teria, “it would have restricted what we could do in the GO Zone. We figured out a model that works for new markets financing.”

According to Marlar, HFHI plans to apply for another NMTC allocation in 2010. HFHI wants to use the tax credits to assist its affiliate organizations on a national level. “This is the first time we’ve done this … it’s not going to be our last,” Marlar said.