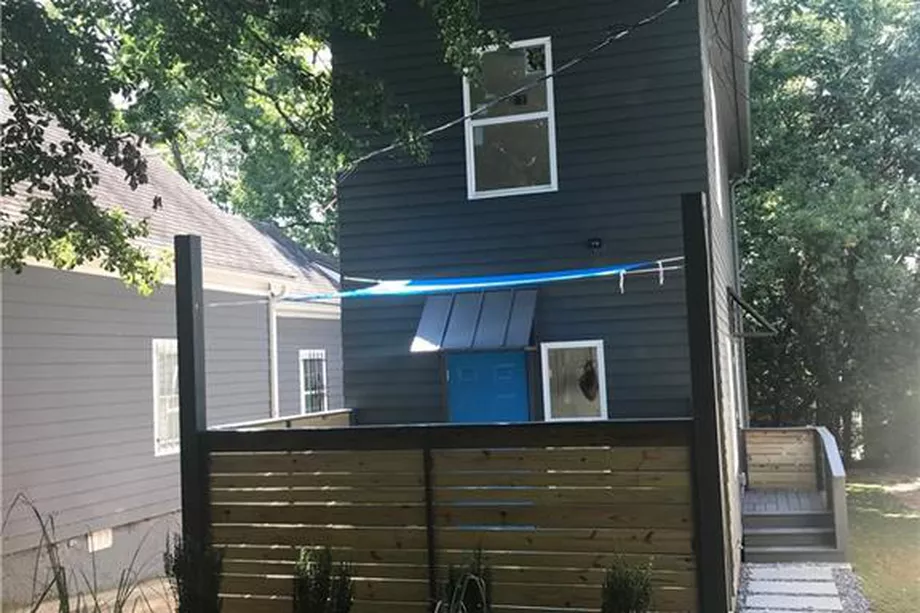 Making the most of a 2,500-square-foot lot takes creativity. A lot of creativity.

However, Jim Cheeks, owner of RedBrick Homes and a listing agent with PalmerHouse Properties in Atlanta, was up for the challenge. This 800-square-foot home contains two bedrooms and two bathrooms on Smith Street in Pittsburgh, just south of downtown.

“I’ve been building a number of smaller-sized homes with the goal to create a more affordable product,” Cheeks told Curbed Atlanta in an email. “We also are striving to do it in a way that does not make it look like a substandard product. In fact, I’ve not only created a very affordable product but also one that is high-quality and, I believe, great design.”

The base of the home was purchased from architect Charles Sax of Portland, Oregon-based architectural firm ADUDesigns.com. Cheeks’s father, a local architect, designed the construction drawings, while Cheeks says he tweaked the design by adding a half bath downstairs and the glass garage door off the living room.

The property owner is Atlanta Neighborhood Development Partnership Inc., a nonprofit affordable housing organization. The group works with federal programs, local jurisdictions, and the private sector to help meet the affordable housing need in the city and region, George Burgan, senior director for communications and technology for ANDP, told Curbed via email.

The organization reached out to its private sector partners to explore ways to achieve its goals by building smaller and decided to team up with Cheeks. “With 909 Smith [Street], we had an opportunity to look at achieving affordability in a smaller infill footprint,” Burgan said.

The construction was financed as a part of ANDP’s New Market Tax Credits allocation.

“This relatively new approach to the use of NMTC—single-family affordable housing redevelopment—has proven very helpful,” he added. “In two years we’ve doubled our annual production from 45 home renovations a year to nearly 100.”

Additional homes could be on the way, at least from Cheeks. In addition to the Smith Street listing, which is available for $179,900, he has another home in English Avenue that’s about 75 percent complete.

He also plans to break ground on a duplex version in Grant Park.

“We’re in permitting for another Grant Park home but this would be an Accessory Dwelling Unit with a traditional-sized duplex,” Cheeks said.