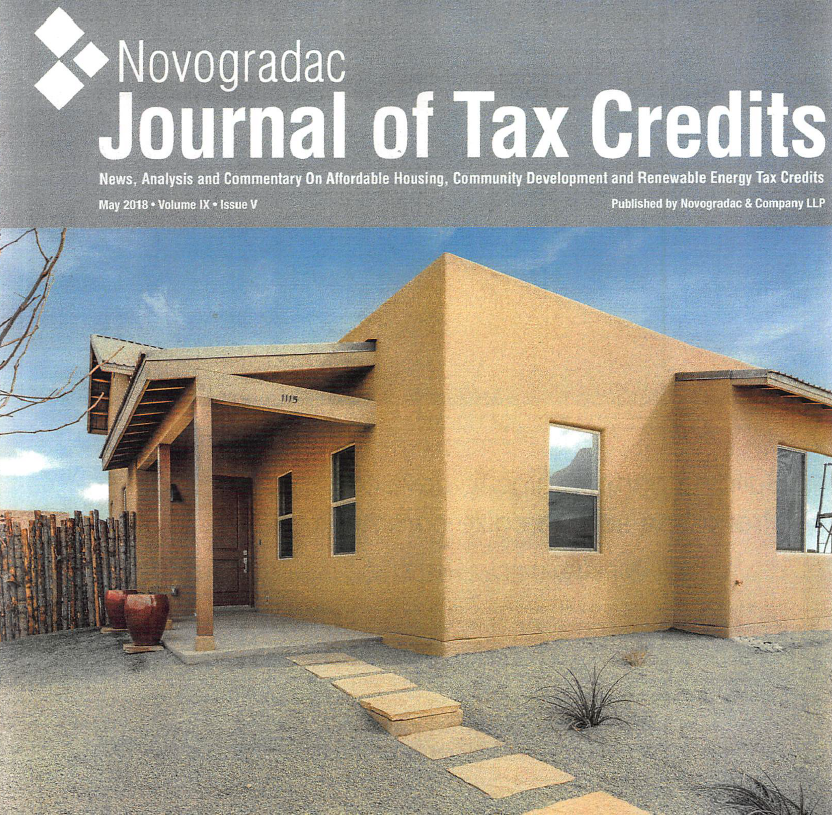 This article was published in the Novogradac Journal of Tax Credits, May 2018.

There are two big winners in a new markets tax credit (NMTC) equity-financed development in Santa Fe, N.M.: the families who bought affordable, energy-efficient homes and the rest of the neighborhood.

“We want to strengthen the neighborhood and that’s what’s really cool,” said Mike Loftin, CEO at Homewise Inc., a New Mexico-based organization devoted to affordable homeownership. “People are embracing this. They can live here, settle down and make it better.”

Homewise received a $5 million NMTC allocation from the Housing Partnership Network (HPN) to rehabilitate an area in a severely distressed census tract in Santa Fe by building and selling about 20 single-family homes as part of the El Camino Crossing development. Other financing sources are being used to develop El Camino Crossing into a mixed-use residential and commercial community that will transform a vacant parcel in a disinvested neighborhood into 64 homes and 23,000 square feet of commercial space.

The results are impressive in an area with unemployment at more than double the national average and median family income that’s less than 40 percent of the region’s median income.

Finding NMTCs
The El Camino Crossing land was purchased and gained civic approval for housing before the post-Great Recession housing crunch. That’s when Homewise purchased the bank-owned property and got creative.

“For me and a lot of people, the conventional wisdom was you can’t use new markets tax credits for this,” said Loftin. “But Housing Partnership Network got an allocation and wanted to do these kinds of deals.”

“HPN was introduced to the Smiths and their model for using NMTCs by our member, Atlanta Neighborhood Development Corporation,” said Katie Rodriguez, vice president of lending and investment at HPN. “We soon realized that NMTCs could be an extremely valuable tool to our 30-plus members doing single-family, for-sale development and began working together to submit an application for allocation.”

Getting board approval for Homewise required education. “I had to explain this to the board and we spent the whole weekend trying to make it simple,” Loftin said. “What I told the board was that this was a lot of work for one project, but we can repeat it. … It’s kind of an outlier and it’s great to see more people get in.”

John Sciarretti, a partner in Novogradac & Company LLP’s Dover, Ohio, office who worked as a consultant on the transaction, said this is a special deal. “This shows the flexibility of the New Markets Tax Credit program,” Sciarretti said. “This project provides an alternative path to affordable housing, which is a crucial aspect to community development in Santa Fe. I give credit to the Housing Partnership Network and Homewise for making this happen.”

Unusual Use of Credits
While not unique, the use of NMTCs for housing is unusual.

“I thought the new markets tax credit was too complicated and couldn’t do this,” Loftin said. “I thought the brain damage wasn’t worth it, but it’s a more powerful tool than I understood. Once you understand the ‘what’ of it, you can do it. The challenge is how you do it. It’s helpful if you’re patient and not on your own. It was really good to do it with Housing Partnership Network and learn together. They were incredibly helpful.”

Tax credit investor U.S. Bancorp Community Development Corporation (USBCDC) was comfortable with the investment. “It’s an unusual structure for new markets tax credits to be in a multiparty fund for housing development, but it’s not unusual for us at USBCDC,” said Bill Carson, vice president and director of CDFI business development at USBCDC, the NMTC equity investor. “We’ve done a number.”

Donna Smith, executive vice president at Smith NMTC Associates, is very comfortable with the use. “These are the only types of projects we do,” said Smith. “HPN specifcally decided to expand its assistance to its members who work in the homeownership/single family space and this is a perfect tool for them to use for that.”

Smith said NMTCs have worked in housing since 2008. Since then, Smith Associates has worked with 14 CDEs, providing allocations for about $350 million in housing.

How it Works
Homewise uses NMTC equity to help offset the price for homeowners and builds in a safety valve.

“The new markets tax credit really helps with [low-income residents buying homes],” Loftin said. “We now  have a subsidy to allow us to sell at lower prices. We figure that if  we have someone earning below 80 percent [of the AMI] buy the home, we charge what they can afford. Then we figure the market price and put in a lien. Because of the new markets tax credits, we can do that and carry a zero percent deferred loan that they only pay back when they sell the house. That means there’s no incentive to flip it.”

The structure works because it cuts the costs and counts on the combination of homeowners paying down equity and rising home prices to fill the gap. “It’s a very powerful structure,” Carson said. “It offsets the construction costs, offsets the mortgage and provides needed capital. Often in models to build affordable housing, you have to sacrifice quality or sacrifice size or sacrifice the mortgage rate. This gives us the best of all possible worlds by wrapping it up in NMTC funds.”

USBCDC’s Carson likes the approach. “This structure takes in the high cost of developing for-sale homes in a community desperate for it,” Carson said. “It puts it in the hands of not only the homeowner, but a nonprofit that needs it.”

The 20 homes in the NMTC deal are single-story buildings. Each has one to four bedrooms and one or two bathrooms and sizes range from 524 square feet to 1,481 square feet. Another five homes will be built during the compliance period in the qualified census tracts. Homewise plans to sell at least 20 percent of the homes to low-income people.

“We could improve the affordability because of the tax credits,” Loftin said. “And the houses are really great. Every home has standard solar and every home is quality. It’s a pretty cool project and people love it.”

After the 20 affordable homes and the 20 market rate homes, the mixed-use property will be developed–40,000 square feet. It will include two story condominiums, with work space on the bottom, housing on the top. Also included is mixed-use space, which is not part of the NMTC deal. It will feature two restaurants and 20 more condominiums.

“People love that they can walk down the street and buy dinner,” Loftin said. “They love the mixed-use and walkability of it.”

Financing
USBCDC invested $1.7 million in NMTC equity. “This is our first investment with Homewise,” Carson said. “Before this, our only involvement with them was a charitable contribution in 2016. We had a strong relationship with the Smiths, building homes with Habitat for Humanity and a multi-QALICB transaction with Housing Partnership Network.”

Reproducible Idea
Homewise plans to do this again. “Our goal is to line up projects in NMTC-eligible tracts and get a pipeline,” Loftin said. He said Santa Fe and Albuquerque are potential sites.

“This is repeatable and has been replicated since 2008 more than 14 times,” said Smith. “Smith works with HPN to replicate it and to keep fees down and to maximize net benefits to the project.”

HPN plans to extend its reach, too. “With our most recent allocation [$30 million in February], we hope to even more broadly extend our reach to members as they can see what was achieved in projects funded to date,” said Rodriguez.

“The most rewarding part of this program is seeing how this financing tool can provide real impact at the neighborhood and community level,” said Rodriguez.

“We have seen it allow our members to scale or complete projects that otherwise would not have been feasible, or much more challenging to complete.”